Wow. The introduction to I Don't Have Enough Faith To Be An Atheist is giving me more writing material than I bargained for.
That's OK. The more material, the better. Just like what Donald Trump is to the mass media, IDHEFTBAA is the gift that keeps on giving!

In this post, I want to look at a series of statements that Geisler & Turek make in a heading called What Kind Of God?, where they classify every single world's religion in to three broad categories:

And then, the real reason I wrote this post, a picture they use in order to represent how God interacts with the world in each theistic category.

1) The classification of the world's religions.

Geisler & Turek not only have created their atheist strawman out of imaginary moral relativists, but they also simplify to the point of misrepresentation.

This happens in four ways:

a) The theism classification really should be broken up in to polytheism and monotheism. This is because firstly, it isn't the case that monotheism is just simplified polytheism with all the basic tenets carry across. The polytheistic and monotheistic religions of human history are all very different. Secondly, the Abrahamic monotheist religions are actually polytheistic henotheist or monolatrous religions, depending on your definitions - God is the supreme god over a number of lesser divinities that have their own powers/abilities/domains, thus by definition making them gods as well, hence polytheistic.

b) Hinduism is so polytheistic that the number of gods in their religion numbers in the millions.

c) Atheism isn't a religion. It's a position with regards to religious claims. As I have written before on this blog, atheism isn't a faith.

Either another oversight by the editor, or a small falsehood that has been allowed in to try prove a bigger point - the enemy of my enemy is my friend?

But this kind of argumentation confirms my suspicions that Geisler & Turek are not committed to accuracy and reason, but in pushing an agenda, thus they concede the middle ground and cannot make themselves out to be reasonable and fair.


2) The view of the world with regards to theistic categories.

This got a small chuckle out of me. 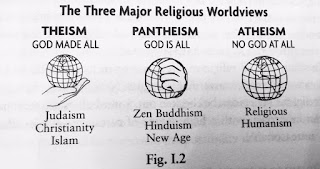 Geisler & Turek attempt to show that with theism, God holds the world in his hand, in pantheism, God IS the world, however in atheism, there is no God holding the world.

Question: If we sent a rocket to outer space and took a picture of earth from tens of thousands of kilometres away, what would it look like? 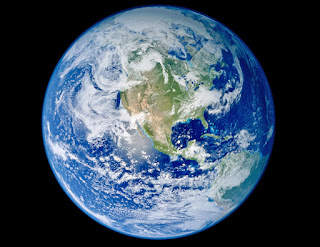 It would, funnily enough, look a lot like this.

Do you see a god holding the world up with his hand? No.

Which theistic category of Geisler & Turek does this picture closest represent? Atheism.

By trying to present God as necessary to the world's existence, they've accidentally accurately represented what the real world actually looks like.

Until next time, be good, stay warm and be healthy.


at November 17, 2018
Email ThisBlogThis!Share to TwitterShare to FacebookShare to Pinterest
Labels: I Don't Have Enough Faith To Be An Atheist